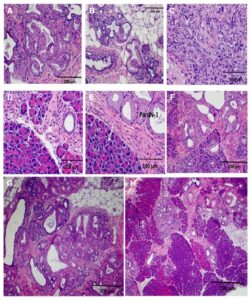 The incidence of pancreatic cancer is increasing significantly and will soon become the second leading cause of cancer-related deaths in the United States. We have previously
shown that the gastrointestinal peptide gastrin, which is only expressed in the fetal pancreas and not in the adult pancreas, is activated during pancreatic carcinogenesis
where it stimulates growth in an autocrine fashion. In this investigation, we used transgenic LSL-KrasG12D/þ; P48-Cre mice that develop precancerous pancreatic intraepithelial neoplasia (PanIN) lesions and pancreatic cancer over time. Starting at 3 months of age, mice were either left untreated (control) or were treated with a gastrin-targeted vaccine,
polyclonal antibody stimulator (PAS 250 mg) followed by a monthly booster until the mice reached 8 months of age when pancreata were excised, and analyzed by histology for PanIN grade in a blinded fashion. Highgrade PanIN-3 lesions were significantly less in PAStreated mice (P ¼ 0.0077), and cancers developed in 33% of the control mice but only in 10% of the PAStreated
mice. Compared with the control mice, fibrosis was reduced by >50%, arginase positive M2 macrophages were reduced by 74%, and CD8þ T cells were increased
by 73% in the pancreas extracellular matrix in PAS-treated mice.